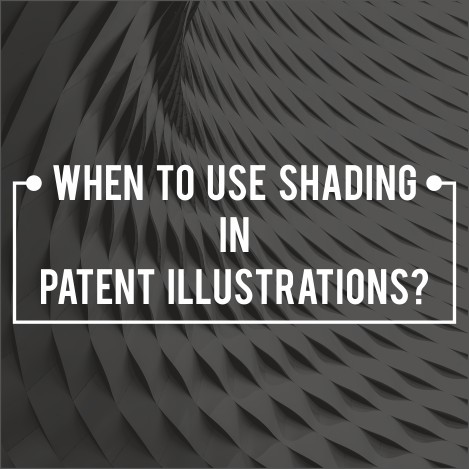 Shading is used to visually define an object for better understanding. Appropriate shading in patent illustrations brings success for the inventor by eliminating potential doubt from the examiner’s mind. Also, it solidifies the claims of a patent. However, there are various shading styles that are used by a patent illustrator while drawing.

The shading types are among the key points of a patent drawing. Majorly, shading is of two types – stippled or linear. Stippling involves the use of small dots which is done by hands. A software-generated drawing does not give natural look. Also, stippling done using hands requires a lot of time. Hence it is costlier than linear shading. The subject matter also decides the shading quality.

Related Article:Why you should not avoid accurate patent illustrations?

Note: Linear shading is the most preferred form of shading. It captures and demonstrates the geometric aesthetic of a figure.

Stipple Shading: The below invention is a “Mat with Inflatable Pillow,” The below figure is a top plan view of a mat with a pillow.

Linear Shading: Below invention is on “Golf club head with aerodynamic design”. The figure shows the section of the head of a prior art golf club.

Rules for Shading in Patent Illustration

In a design, patent application surface shading is all about clarity. For example, you can consider the shape of curvature. Proper shading along with contour lines will be a great help in shading it. But, avoiding shading makes the drawing unclear and difficult to understand.

Areas that Makes Difference in Shading in Patent Illustrations

Tangencies are the common areas where shading makes all the difference. It is a curve line or surface that just touches another surface.

Edges, where two different surfaces merge into each other, are known as visual tangential edges. However, if considered visually they do not have definite edges. So, are considered under surface shading in line drawings. Hence, tangential edges play an important role in the understanding of a shape of an item. Also, bold lines coming under surface shading show raised areas, openings, indentations, and an objects’ shadow side. It is difficult to show raised hollow or intended areas without proper shading.

It is true that a good drawing makes a good application and gives you strong patent protection. Do you want to depict your invention with clarity and accuracy? If yes, then you are in the right place. We, at Patent Illustration Express, have experienced professionals who draft hundreds of error-free drawings every day. Also, they regularly update themselves to deliver you the best patent illustration solution.

Why is IDS Management Service Important?

The Importance of Provisional Patent Illustrations